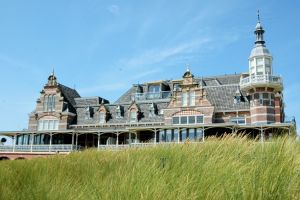 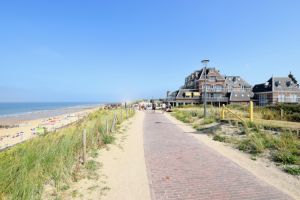 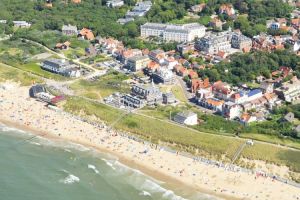 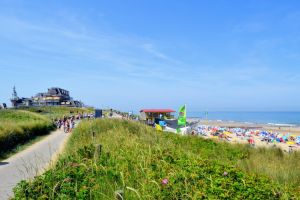 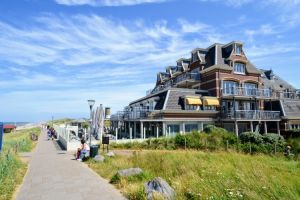 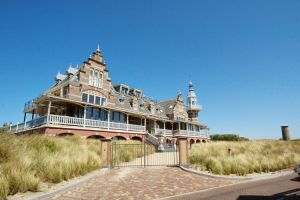 The Badpaviljoen (Bath pavilion) is an iconic landmark in the dunes surrounding Domburg. The first Badpaviljoen in Domburg was built on the current location in 1837 and was a kind of coffee-, and bath house. The pavilion was designed in classicistic style by the architect Gerardus Grauss (1807 – 1882) from Middelburg and had one large hall.

By commission of the Domburgsche Zeebadinrichting, the building was replaced in 1889 by more or less the current pavilion. The building is designed in lavish Dutch neo-renaissance style by the architect Johannes van Nieukerken (1854 – 1913) from Middelburg, whom also designed the neighboring Villa Carmen Sylva. Contractor Johannes Hornstra (1850 – 1908) had it built for 33.000 guilder (about €15.000). A souterrain in the dunes emerged, because the building was put in front of the old pavilion on the landside. The new building consisted of a large concert- and kur hall, a conversation hall, a billiard room, a reading room for gentlemen, a salon for the ladies, verandas on land- and on seaside and a large terrace on the seaside.

Besides dignitaries from Zealand, it was also regularly visited by distinguished guests from all over Europe, who came to Domburg to consult with the famous doctor J.G. Mezger (1838 – 1909). They were soon followed by the Dutch aristocracy, and, especially after WWI, well-off middle class. It became the central meeting point for bathers. Under supervision of director Paul Elout (1873 – 1958), husband of painter Mies Elout-Drabbe (1875-1958), the Domburgsche Zeebadinrichting organized dancing nights, children’s balls, concerts, speeches etcetera. The artists didn’t visit often, but in the second decennium of the 20th century, one could meet historic Johan Huizinga (1872 – 1945) as lightning sketcher and storyteller, as well as the composer and painter Geert von Brucken Fock (1859- 1934) as pianist.

From the seventies of the 20th century onwards, the pavilion fell into disarray, but became an official national monument in 1983. Up until 1995, the building was being used as a restaurant. Decay loomed, but in 1998 it was bought by a project developer. In 2009, the complex had been restored and rebuilt: with a design from architect Egbert Hoogenberk (1950), with a substantial enlargement towards the seaside, on the spot of the first Badpaviljoen. It consisted of the (rebuilt) Large (Kur-ball) Hall, a restaurant and nine large private apartments. By merging it eventually became seven apartments, of which sex have sea view. Back then, these were the priciest apartments in the whole Netherlands. The square meter price is much higher than a house on the canals in Amsterdam. The reopening was on June 11th, 2008, by Prime Minister Jan Peter Balkenende.

Year of construction: 1889
National Monument: Since 1983
Open to the public: only the restaurant is open to the public. The apartments are private property, are not rented out and can’t be visited (to view the interior).